In the year of 1894, the eastern section of Chambers County was opened by the State of Texas to those people who would be interested in settling the land by homestead grant of 640 acres of land. This grant could be claimed by living on the land continually for a period of three years in order to prove claim and by paying $1200 to the State of Texas, either in full or by time payment plan of $50 a year interest on the principal until such time as one could liquidate the indebtedness. A good title and abstract was available to anyone who met these requirements. 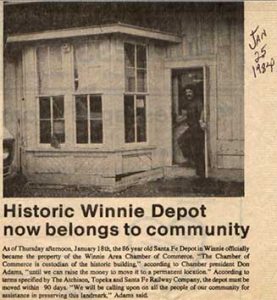 This offer brought home seekers and early settlers. Some of them proved their claims to the land, but others did not like pioneering with its hardships and diseases, which were prevalent at that time. Mosquitoes were plentiful and many people died of yellow fever and other diseases. Anthrax killed their cattle and then came the big snowstorm of 1895, which dealt a devastating blow. This snowstorm was an unusual condition in an otherwise balmy southland. Some of the early pioneers braved these hardships and prospered.

Other sections of the State were watching this progress, slow as it seemed. Finally the Gulf and Interstate Railway Co. (now the Santa Fe Railroad) made a survey and agreed that it was wise to give an outlet by rail transportation to the gulf coast. Fox Winnie was sent as an engineer by the railroad company to review the prospect of such a venture and found it desirable. In the 1895’s the surveys were made and the town of Winnie was established on the railroad and named in honor of the engineer who built the railroad through the area. The railroad was completed to Port Bolivar. A train served the town of Winnie each day. Wages paid the common laborers were $.50 per day and they carried their own lunches. Some of the more prominent men were the common laborers, as money was difficult to earn in those days.

Fox Winnie and Mr. Featherstone of Galveston were the men responsible for getting the railroad project started. Plans to build the railroad straight to Kansas City, Missouri were altered when construction halted one mile north of Winnie. Later it was completed into Beaumont, Texas, hence the curve in the railroad.

The train brought the mail, which heretofore was delivered by horseback. The first postmaster in Winnie was a man by the name of Guess. The present railroad station was built in 1905, the same year that the town site was laid out.

Some of the very early settlers of Winnie were the William Creels, who owned and operated a hotel-boarding house located on the present main street. Bill Finkie was an early settler who lived on the Campbell Place, ½ mile north of the depot. The Reverend Thomas Ward White of Beaumont located in Winnie with his wife, son and daughter-in-law.

Dr. & Mrs. W. W. Cunningham of Beaumont built the house for them and is now occupied by the John L. Ogden family. Rev. White and is son specialized in the lumber business, featuring the sale of long leaf pine to the area settlers. Rev. White, a Presbyterian, died and was buried in the old Winnie Cemetery north of Hwy. 124. Later, his remains were moved to Beaumont. Mr. Creel was the first man to die in Winnie and was buried in the same cemetery. The first white child born in Winnie was Carl Daugherty.

The first school was held in a one room building in the center of town. The school was later moved across the street upstairs in the hardware store owned by L. G. Ogden and Sons.

Early settlers had church services in the homes until the school buildings were available. Mrs. Dunshie was a good Christian leader, a Methodist, as was the Rev. T. W. White. Sunday services and prayer meetings were held as often as was convenient for the congregation to convene.

Modes of transportation other than the trains included horse and buggy, surreys and wagons. The first automobile made its appearance in Winnie in 1909 and the first airplane in 1919.

Things progressed quite well and the Farmer’s Canal (now Devers Canal) was built and a good trade area was opened. For food, rice was plentiful. The firs rice crop was grown in 1900. The crop was then known as providence rice as no irrigation was available. The canal was partly completed in 1901 and served many acres with irrigation water.

The 1900 Gulf hurricane did a vast amount of damage to the crop and cattle in the area and the high tides and water washed out the new railroad as far north from the Gulf as Seabreeze. The railroad was rebuilt within two weeks.

Winnie flourished for a while then it seemed that people went away to other nearby towns and north to Illinois, Wisconsin, Michigan, Indiana, Missouri and Nebraska. Theodore F. Koch Land Company came into town. They brought interested parties from Minnesota, Michigan, Indiana, Wisconsin, Illinois and Ohio. Homes, grocery stores, hardware stores, implement stores and garages were built to serve the public. Two blacksmith shops were opened. Pecan groves were planted, vegetables grown and a real market was opened for business.

Figs were introduced and two fig-processing plants were in operation. These plants used the figs of very fine quality and shipped them to the eastern markets. Severe freezing for several winters reduced this fine crop to failure.

A hotel was built to care for the tourist trade in season and was always under the management of Mrs. J. Lynda Evans and her son from Minneapolis, Minnesota. The late W. Lynda Evans succeeded her in the hotel operation until the business was sold.

Winnie had some reverses such as the 1915 hurricane that destroyed the old community church and wrecked other buildings. Rice was a total loss and again the area flourished only to be hurt by the drought of 1917. In 1918 and 1919 rains again refreshed the
land and the crops were good.

The World War I years of 1914 through 1918 left their mark of inflation followed by about ten years of depression.

Oil drilling in the nearby Double-gum and White’s Ranch were the first oil operations to bring men with their payrolls to Winnie. At present oil discoveries and activities added much to the great resources we enjoy.

"Networking and reaching new customers is always our top priority. To that end, the Winnie Area Chamber is an invaluable tool for us, as a local small business. Thank you!"

"As a non-profit community pillar of arts and culture, we know that the Winnie Area Chamber is committed to helping us build relationships and promoting our mission to make theatre accessible to all."